← Dirty Underwear. Filthy Socks. Muddy Jeans. Stained T-Shirts. What To Do With Dirty Laundry?
Ghost Chickens in the Sky →

It Pays To Be A Third Day Fan

After Friday’s Third Day concert in Ft. Wayne, I stayed to help with merchandise pack up. I had been awake since 4:30am as I drove up to the venue to be a part of the unload/set-up merchandise team. Point being, I was tired. So, sometime between 12:30 and 1 a.m., I was cruising along in a zombie-like state and realized I had failed to reset my cruise control after leaving the 65 mph zone when I saw the flashing blue lights on the car driving by turn on.

He turned around to “come get me” – I was already pulling over. I was busted. I’ve never had a ticket for speeding. I was pulled over ONCE 22 years ago but only because the boat-on-wheels called a Volare that I was used to driving was out of commission and we had borrowed my brother-in-law’s very nice, newer car with incredible pick-up! The officer had been merciful. (I just wanted you to know that I don’t make a habit out of speeding).

Here’s where I need to mention that I had just put my new Third Day bumper sticker on our catering van (much to my husband’s dismay) THAT morning! 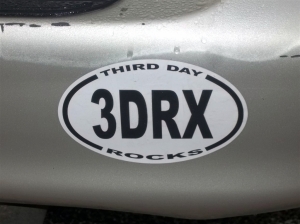 I pulled out my driver’s license and registration and waited. He came to the passenger side window. As I handed him the needed items, I said, “Sorry -forgot to change my cruise control.” He looked at my license, called in my numbers, then the following conversation transpired:

As the officer glanced back at my bumper – “You a Third Day Groupie?” (Groupie- cute)

“On your way home from the concert?”

“How was the concert?”

“Alright, when this comes back clear, I’m gonna let you go.”

“Alright, slow down and be safe.”

“Thank you so much!”

No kidding, folks!!! I got pulled over by a Third Day fan! How incredibly cool is that??

I was awake and thanking God after that.

What’s not shared is lost.

← Dirty Underwear. Filthy Socks. Muddy Jeans. Stained T-Shirts. What To Do With Dirty Laundry?
Ghost Chickens in the Sky →