I Got A Feeling!

Well, I had a feeling. I had a “feeling” in January that I would be going to the Third Day concert in Lexington in March. As the time drew near, it was NOT looking good. I was hoping to take Ben and Noah as I knew I would be taking Jillian and Natalie on a road trip in May and wanted to spend some “hang-out time” with them. Gas prices being what they are and deposit on a cruise being what it is, I had pretty much given up hope but I still felt like I was suppose to go.  As it turned out, the boys were invited to an Air Soft War the same weekend and they would much rather go shoot and be shot than tag along with me to a concert so I asked Craig if he wanted to go. OF COURSE he wanted to go but he couldn’t get off and was still concerned about the cost. Last Wednesday, two days before the concert, I got an email from Merchandise X saying they needed help with A-team (my preference). My only hope for even being able to be admitted to the concert was working merchandise as it was a sold-out show and you get a free ticket when you work merchandise. You also get a t-shirt. Sweet deal. That same day, my dear Gomer friend, Robyn from Detroit, called about going to the show with me and splitting gas.  God cares about the little things. Especially me because I’m His favorite.

The next day, Robyn was crashing at my place and Friday morning we were up and on our way before dawn. I love road trips! We worked merchandise together before at the Ft. Wayne concert and we make a pretty darn good team. It’s work but it’s fun and a “relaxing productivity.” We were just starting to get busy when some goofball came out on the balcony walkway over the foyer and started singing opera or something to us. I looked up to see who the weirdo making me laugh was and it was Tai Anderson. He he he….

After working, Robyn and I hung out a bit and debated on whether we wanted to risk giving up our sweet parking place. The threat of rain said, “You know, if you walk to get lunch, I’m going to dump buckets on you.” So we drove and it just drizzled. We ate at J.J. McBrewster’s, some mighty fine barbecue! Our table greeted us with this:

We were so humored, we bought a bottle for Mac. 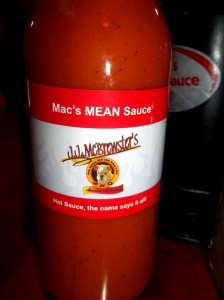 The pulled BBQ Pork with fixins was DE-lish! We were so stuffed!

After lunch, we returned to Quest Community Church to find that our ringmaster, Lisa, did in fact, need more help which we were happy to provide.  After that, the crowds started to arrive and the Wired wristbands were being distributed. That was another treat – our Wired membership expired in December and we can’t afford to renew just yet. I had resigned myself to just going to the concert – that was enough for me! Robyn had mentioned that she was pretty sure we could figure something out but the thought occurred to me that I have wonderful friends called Gomers and I knew several were going to the Lexington concert.  I posted on the FB page asking if anyone going with a family membership could add  me as a friend. NatiGrl Gomer  came to the rescue so I was able to go the Meet & Greet, too! Thanks so much Natalie! 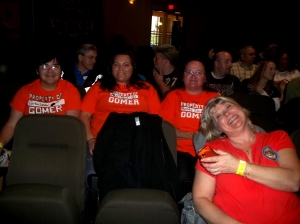 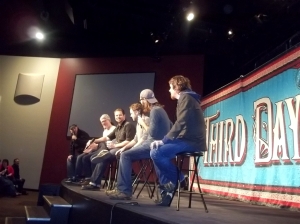 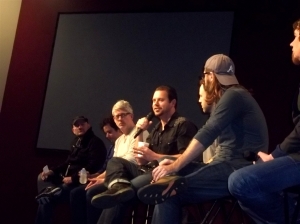 It was great to see several friends there and to partake in the Q & A and M & G.  The guys are so genuine and a joy to be around. They really are some of the friendliest people and, though some M&Gs are crazy like Friday due to large crowds, that they take the time to visit with as many of their fans as possible shows just what gents they are. 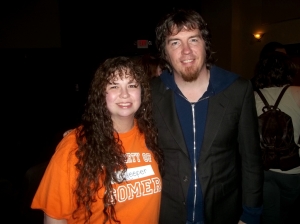 Mark Lee, Doctor of Musicology, and myself 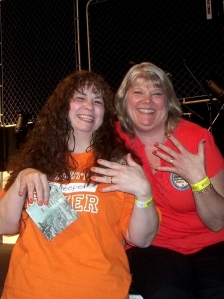 Oops! Forgot to include a pic of the toenails! I love Robyn. She's crazy.

After the M & G, we went to the auditorium, and it was packed.  We just “so happened” to sit just across the aisle from the DeChants, dear friends we met a Third Day concert some time ago. They are sweethearts and I was SO happy to see them! Another Gomer, Chelsie & her mom sat with us. Gomers behind us. Worshiping together was tremendous!

Trevor Morgan - if you don't have his CD, get it. Now. Trust me.

My first Matt Maher experience - won't be my last! So jazzed he will be on the Third Day cruise, too!

Robyn had led the way to seats that “just so happened” to be where the guys parked their acoustic set (which I had forgotten about). I’m tellin’ ya, I’m God’s favorite.

SO, we were treated, not only to front row, they also played Love Song which I had requested on Twitter. Whether that’s the reason they decided to add it to the set list or not, who cares? They played it and it was Goosebump-worship-time!

This was the next best thing to being in front row. Just sayin’.

God of Wonders with Matt Maher!

As if I had not been spoiled enough, there was an after-show acoustic concert with Nigel (he sure knows what to do with a harmonica), Matt Maher, Trevor Morgan and Mac.  It was incredible! I got a feeling, alright: that I’m God’s favorite. Have I mentioned that? 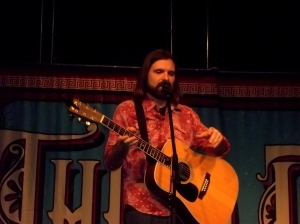 Third Day rocked the house. But more than that, I was lost in worship during this concert. The fellowship, singing and dancing – that’s what I was needing after being over-extended and overwhelmed for way too long. God knew that. I “had a feeling” He knew what I needed.

If you’ve never been to a Third Day concert, you don’t know what you’re missing. You also have to go to at least one to be qualified to make fun of how psycho us Gomers are about our band. Then…you’ll be one of us and find yourself making fun of yourself for being so psycho! Besides….

I got a feeling we’re going to have a fantabulous time in Raleigh when we gather with  Gomers for a big partay! (FYI for those not in the know, I Got a Feeling is a Third Day song, just in case you didn’t figure that out.)