Several folks had asked for close up shots  and pics of us making this cake via Facebook and Twitter so that’s why I’m taking the time to journal the making of said cake with more detail than I usually would. It was an especially fun cake to do so I don’t mind a bit. Having several family members contribute to the creation of this edible work of art makes the memory worth keeping so I’m happy to “scrapbook” this here. I have a lot of pics so I’m not going to try to put it all in one post – you have stuff to do and other blogs to read.

If you missed it, visit Part 1 and Part 2 then you’ll be caught up to speed.

First of all, we had to make Cake Pops for some Gomers who have heard about them and have seen our photos of them. We also like to take some for Lott, the tour manager, as he seems to like them quite a bit. If he’s just faking it for our  sake, he’s doing a good job. We’ve learned that the band doesn’t usually get the treats folks bring them (bummer since that’s one of our “love languages!”) but Lott acts like he’s going to steal them when we bring them. SO, we gave him his own and the band got stuck with cake. 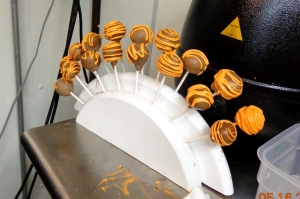 FINISHING THE CAKE BEFORE TRANSPORTING

I forgot to include the cake board when I started this. One of our signature elements: folks get a kick out of serving out cake to discover a message or picture hiding beneath. I was hoping to use the Come Together symbol with a photo but ran into technical difficulties and didn’t have time to make it happen. 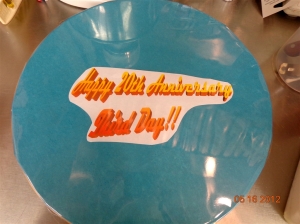 Back to the drum: Before I took a good look at what instruments we’d be putting on the cake, I purchased Opalescent spray for that “sparkly drum” look. THEN, I asked for help from Gomers for good pics and did my homework. The realization that David Carr’s Craviotto Drums are wood grain left me wondering what the heck I was going to make sparkly cuz I was bound and determined to use my spray paint! Darn.

I went to work on the last of the hardware attaching pieces with Piping Gel. Jillian and the small fries had already made the smaller pieces so it was a “simple” matter of assembly and painting. Cakes can be so….stupid. Sometimes,  I swear they’re living, breathing, evil creatures just waiting for us humans to try to shape them into something fabulous but they decide to be “in control” and rebel against their maker!!! Okay, I’ll calm down. Enough of that…stupid cake. 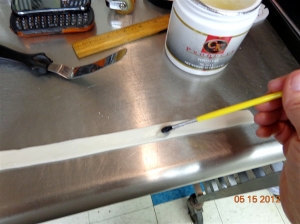 I made a couple of shades of vodka paint with brown icing color for the wood grain. Icing color tends to deepen or darken as it dries so I kept working with the colors trying to get them to match David’s drums expecting the paint to act like icing. It doesn’t work the same, I found. I made a vodka paint with luster dust  and used that Opalescent spray for the hardware. I tried the sliver metallic spray and was not happy with the results. I’ve used the gold before and that looks great but the silver looked blue.  Luster dust for silver. Write that down.

This was where we stopped on the cake on Wednesday, May 16. We loaded the layers in a Cambro carrier with he exception of the 14″ bottom layer which didn’t fit so it was placed on top of the carrier. Each layer was placed on a piece of foam covered with a “grip mat” and the cakes survived the trip with minimal damage. Some pieces slid out of place but I was thrilled that we drove a cake from Indiana to North Carolina and they made it! Our first long-distance delivery. Yay!

Thanks for taking a gander!