Yes, I’m still here. I continue to do that “thing” where I tell myself I’m going to reward a finished to-do list with sit-down-with-my-blog time. Yea…right…12 kids, 3 grandbabies, catering business, homeschool, laundry.  In light of the fact that I still have taxes to prep, I’ve decided that if I’m ever going to post again, I better sit down and do it then get on the list. Everything important eventually gets done and the things that don’t get done are the things that never get finished anyways. That being said, I’ve had A LOT on my mind! I could have 50 posts since the last one if writing was my job. I’ll get there…I won’t give up!

On my mind, recently, have been a few peeps who either are deliberately trying to hurt me or are carelessly and/or selfishly wounding my family and I. An ongoing struggle has been a family member that I sincerely wish would be involved with my children and myself but has spent years making excuses then blaming me that we don’t spend time together.  There’s more to it but suffice it to say, it hurts, it’s frustrating and I’m about fed up.

Others on my mind are some folks who I once thought friends but, because they believed the gossip of others without ever contacting me to confirm that what they were hearing is true, decided I was unworthy and “don’t pay me no mind anymore.”

Finally, I am a business owner. I own a catering and custom cake design business with my family. We have worked hard to create a legitimate food service industry business. There’s a whole other blog post on what that entails but for this one, being attacked by another for no other reason than we’re competition is aggravating. The quality of my product has been questioned and even lied about and it’s been implied that I and others in the business have been trying to sabotage this person who has a reputation for playing dirty.  The other thing about me is I try to be a nice person! I don’t “get” people who aren’t nice to others. And when they come after my family or me just because they’re mean, I kinda want to get mean back.

So these situations have been popping around in my head like popcorn and my thoughts have not been passing the Philippians 4:8 test, I can tell you that. Last week, as I was running errands and running amuck, I popped in a cd I haven’t listened to in a while, Jason Hoard’s The Road Ahead. 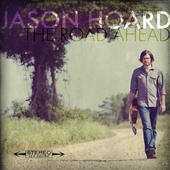 That Old Wheel came on and I had to listen to it over and over again (there’s kind of pun there – if you listen to the song, you’ll get it.) This album was released in 2011 and That Old Wheel was originally performed by Johnny Cash and Hank Williams Jr., so it’s  certainly not new but this song in particular was just a friendly reminder to hang in there; what comes around goes around. The lyrics don’t mention it but it reminded me, also, to “do unto others as I would have them do unto me” and “do not take revenge, my friends, but leave room for God’s wrath, for it is written, ‘It is mine to avenge; I will repay,’ says the Lord.” Tsk, tsk….anyone who knows us knows that we’re some of God’s favorites so I feel somewhat sorry for those who want to muck with us.

I’m going to keep hanging in there and keep my chin up. For every person who wants to see me down, there are a bunch more who keep me up and I want to do the same for them. I’m going to try to remember to focus on those friends and family instead how low those “other” people can make me feel.  I hope you will hang in there with me.

Click on the album pic for the I-tunes link. You won’t be disappointed!